This chapter describes the materialising data and a description of the results will be applied This using the frequency command of SPSS. Only the valid percentage will be discussed, and, where necessary the number of missing cases or respondents who failed to answer the question will be indicated if the finding is significant. Where appropriate the descriptive command of SPSS will be applied indicating the mean and standard deviation of the nominal and ordinal data. A combination of univariate and multivariate tests are used.

Question 1 – Are you Male or Female?

The systematically random selected target sample of respondents according to gender in the sample population is shown by examining question one. This response shows that 97% of the sample population are male and 3% of respondents are female. All respondents replied to the question. The Table shown and Figure 6.1 shows the significance of this result. The measure of central tendency or the mode for ordinal data in this question is 1.03. Standard deviation or dispersion from the mode is measured as 0.17, which is very low. The dispersion in this question ranges from 0.86 to 1.2. The distribution of the variables are very close to one another. The Table at the end of this section for questions 1 to 13, indicates the mean and the standard deviation. 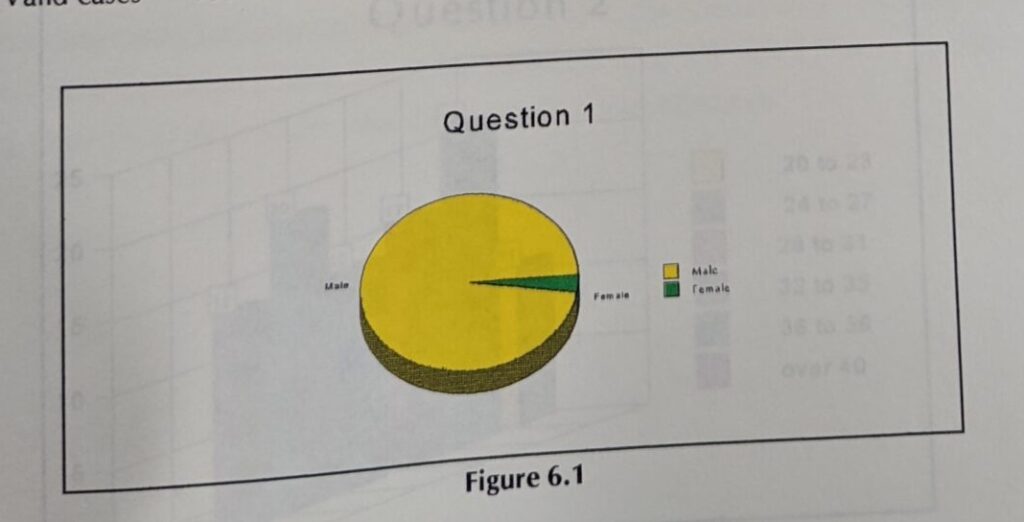 Question 2-What is your age group?

The majority of respondents are in the age group 24 to 27, representing 22% of the sample. Twenty percent are in the age group 36 to 39. Seventeen percent are age between 28 and 31. Fifteen percent are age between 32 to 35 and over forty. This result shows that a higher concentration of older respondents replied to the survey instrument than younger respondents. All personnel within the target sample responded to the question. It is also interesting to note that no respondent is within the first age group, that is 16 to 19. The table and Figure 6.2 indicates the recorded data. Ordinal data in this case generates a mean of 4.56, and the standard deviation is 1.63, which indicates 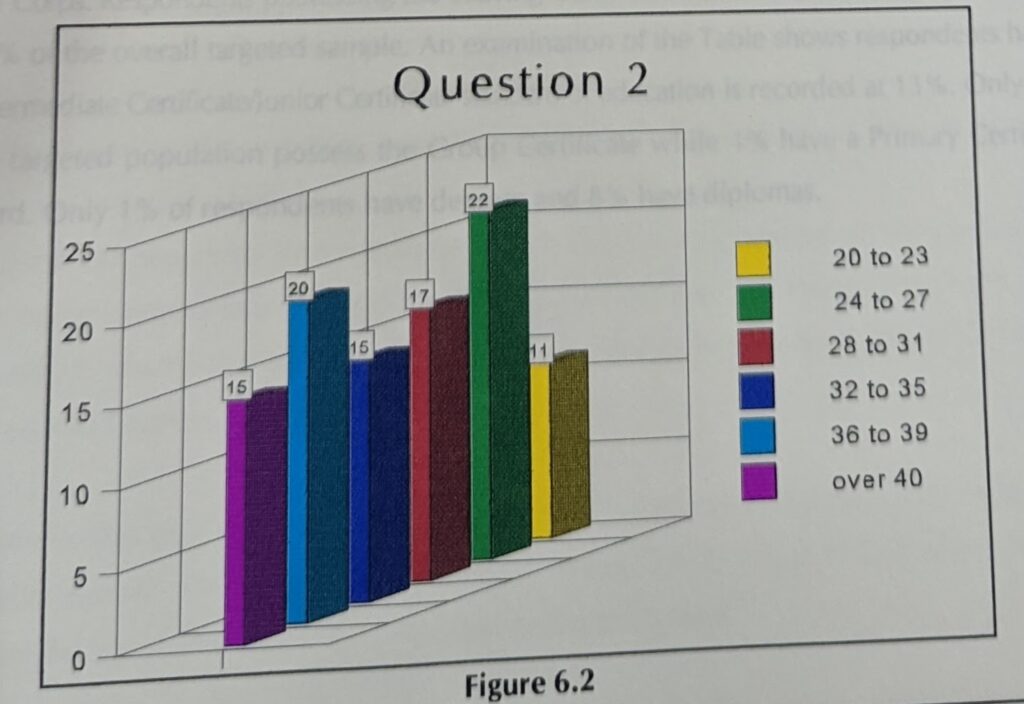 Question 3 – What is your marital status?

The majority of respondents to this question are married and the valid percentage is recorded at 63%. Only 29% are single, 2% of respondents are separated from their spouses. More than double this figure are co-habiting with a partner and 1% of the targeted population are in a second relationship. This result shows that half of the separated respondents have formed a relationship with another partner. All respondents answered the question therefore, no missing cases are recorded. The mode for this type of nominal data is shown to be 1.52, and the standard deviation is 0.85, indicating a narrow dispersal of the frequencies. The spread of the frequencies from the mode is 0.67 to 2.37. Reference to the table and Figure 6.3 shows the recorded significance of the data.

Question 4 – What is your standard of education supported by examination results? 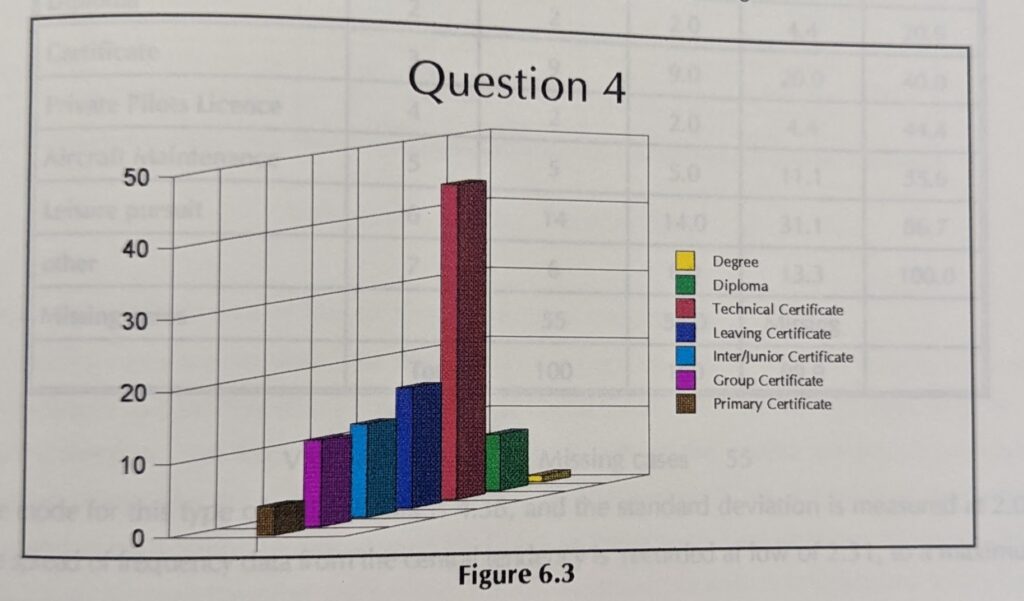 A very small number of respondents have a low standard of education, that is, Primary Certificate and Group Certificate level.

The mode for this type of nominal data is 3.85, and the standard deviation is 1.35, indicating a reasonable spread of variate frequencies from a low of 2.5, to a high of 5.2. All respondents answered the questions therefore no missing cases are recorded.

Question 5-Are you currently pursuing any studies in your own time!

The mode for this type of ordinal data is 4.38, and the standard deviation is measured at 2.07. The spread of frequency data from the central tendency is recorded at low of 2.31, to a maximum 6.45.

Question 6-What is your length of service in the PDF/Air Corps?

Question 7 – Which unit of the Air Corps are you a member of?

Five missing cases are registered for this question. A response rate of 95 valid cases is recorded. It is probable that the five missing respondents decided not to answer this question in order to avoid detection. The majority of respondents or 27.4% of the sample are from Basic Flying Training Wing. The number of respondents from Engineering Wing is 14.7% of the sample. Personnel of No 3 Support Wing account for 12.6% of the sample. Two units No 1 Support Wing and Group HQ, both have the same value of 8.4%. Respondents from Administration Wing have a valid sample of 7.4%. Personnel employed in the Air Corps Computer Centre are 5.3% of the sample. Three units Air Traffic Control, Supply Squadron (MTS), and Photographic Section have the same sample strength of 2.1%. Respondents from Air Support Company Signals represent 4.2% of the sample. Personnel from the Air Cops Training Depot are 3.2% of respondents. Two units Apprentice School and Passenger terminal have the same sample strength of 1.1%. The nominal date in this question has a central mode of 15.94, and the standard deviation from the mode is 7.72, indicating a substantial spread of the frequencies. The spread of the frequency variate is recorded at a low of 8.22 to a high of 23.66. Units recording large valid percentage score are predominately technical units.

All elements within the target sample responded to this question. No missing cases are reported and a very satisfactory return is reported. The table and Figure 6.4, shows that personnel of the rank grade Corporal, returned a score of 40%. Two frequency variables of the rank grade Air person and Sergeant recorded the same grade of 23%. Flight Sergeants or Company Sergeants returned a valid score of 11%. Three rank levels Apprentice, Battalion Quartermaster Sergeant and Sergeant Major returned the same ranking of 1%. The central tendency for this type of nominal data is indicating a mode of 3.29. Standard deviation is scored at 1.13, and the spread of the variate variables indicates a low of 2.16 and a high of 4.42. 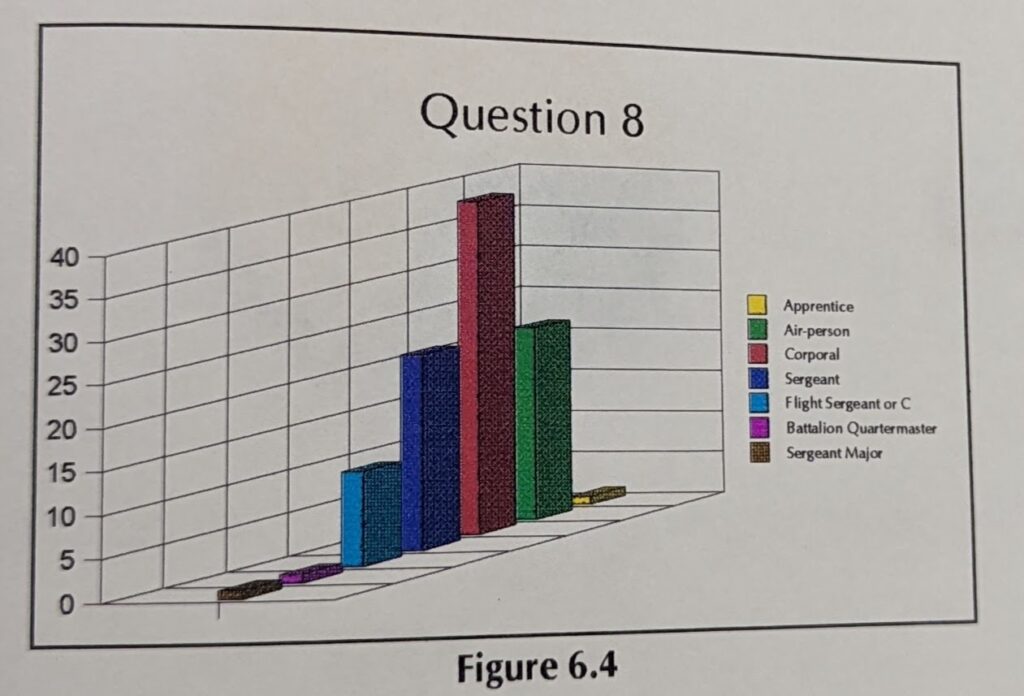 Question 10 – Do you intend to pursue a long term career in the Air Corps?

Only one missing case is recorded and ninety-nine valid cases are described. The Table and Figure 6.5 shows a very high return is indicated or 71.7% of the sample population intend to pursue long term careers in the Air Corps. Only 28.3% of the sample responded negatively to the question. The mode for this type of ordinal data is 1.28, and the standard deviation from the mode is 0.45. The variability of the frequency data from the central tendency is 0.83 to 1.73. This result indicates that most of the variable is concentrated around the mode. 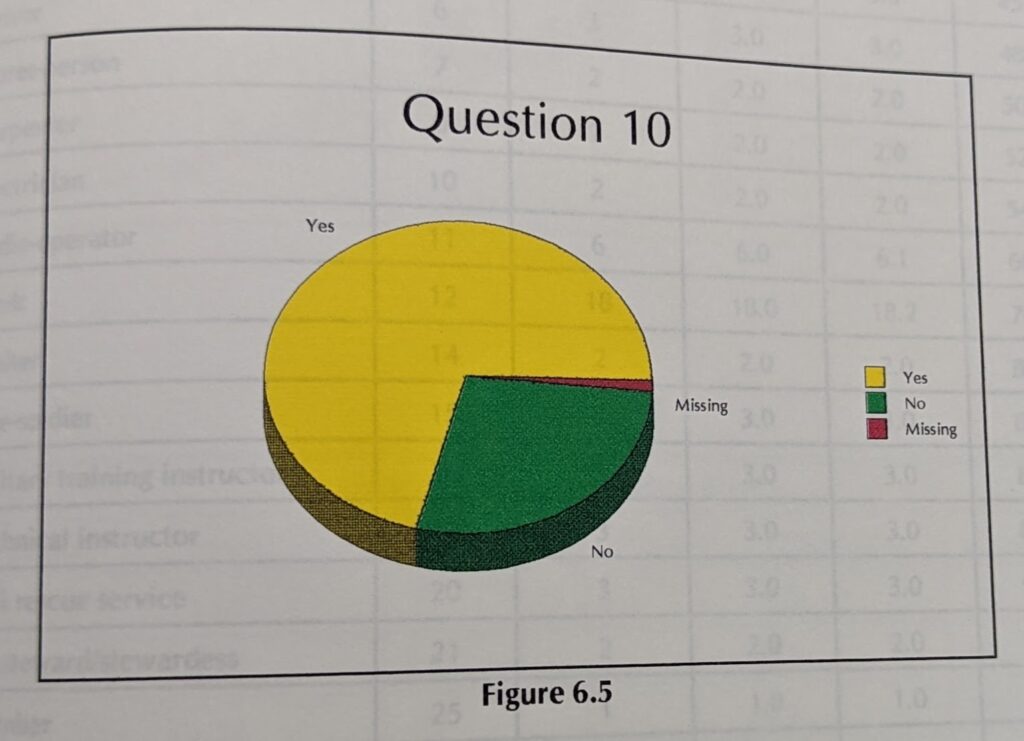 Question 12- What is your principle occupation in the Air Corps.

Only one missing case is reported in this question. The majority of respondents are Aircraft technicians and this is validated by a return of 24.2% of the sample. Two job occupation groups Clerks and Tele-Communication technicians have a score of 18.2%. The number of Radio Operators among the valid sample is 6.1%. Seven frequency variates record a score of 3%. They are Air Traffic Control personnel, Drivers, Line-soldiers, Military Training Instructors, Technical Instructors, Personnel employed in the Heli Rescue Service and Chief Systems Computer Programmers. Five job occupation have the same score of 2%. They are Stores-person, Carpenters, Electricians, G4 Steward/Stewardess, and Waiters. Only two job occupations scored the standard deviation away from the mode is recorded at 7.32. The Table and Figure 6.6 displays 1%. They a are Plumbers and Photographers. The mode for this type of nominal data is 8.37, and the relevant data. The spread of the frequency variates away from the cluster of central tendency is from 1.05 to 15.69. This result indicates that the frequencies are very widely spread out from the mode. 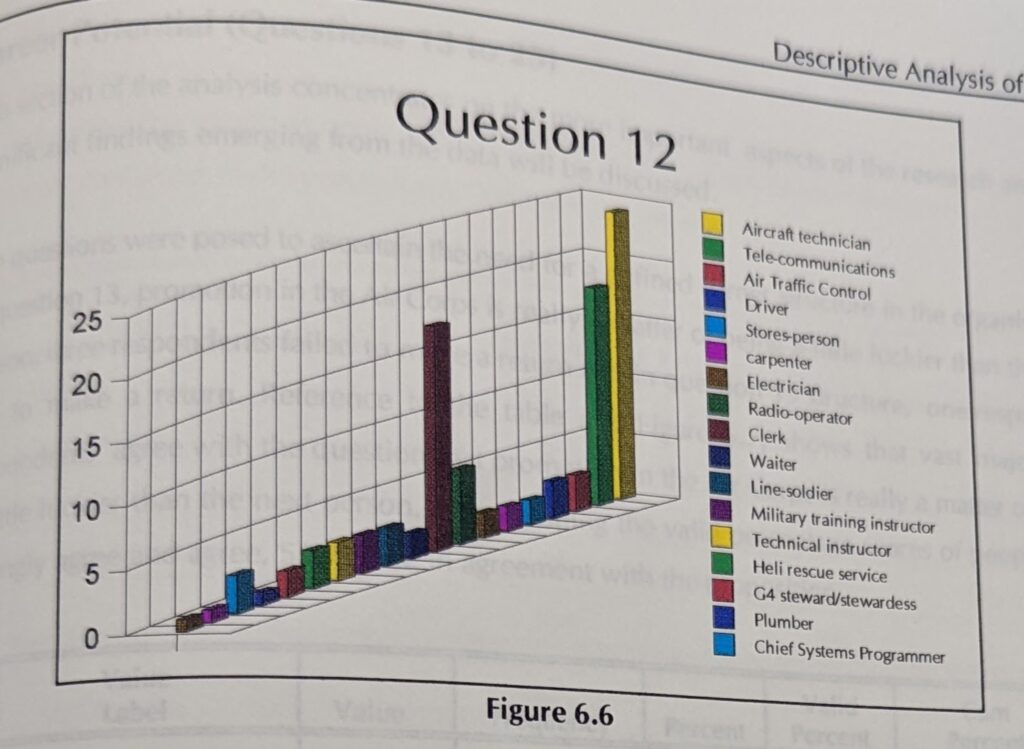 This section of the analysis concentrates on the more important aspects of the research and any significant findings emerging from the data will be discussed. 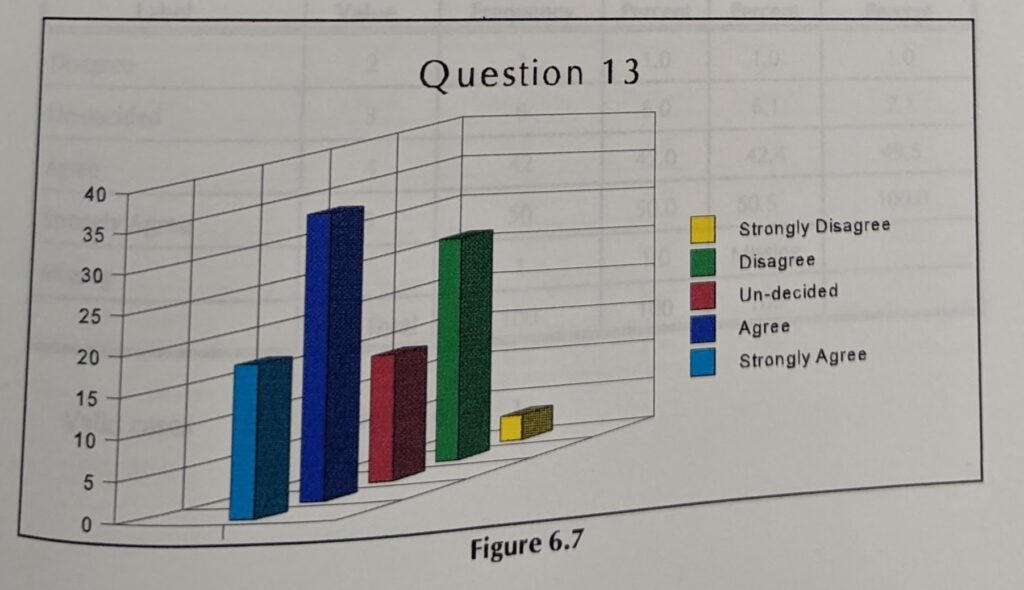 Question 16-I am prepared to accept extra responsibility in order to enhance my career opportunities.

By collapsing the values strongly agree with agree 89% of the respondents concur with the statement contained in the proposition. indicates the returned data.

Question 19 – A career structure requires to be developed for enlisted personnel of the Air Corps.

In question 19, the respondents are positively certain that a career structure requires to be developed for Enlisted Personnel of the Air Corps. The table and Figure 6.8, shows by combining the value labels agree with strongly agree 92.9% are in favour with the proposition.