Exposure to hazardous materials may be acute or chronic. Acute exposures refer to single high concentration exposures over shorter periods, while chronic exposures are repeated or continuous exposures over longer periods. Exposures to any toxic material may have either acute, immediate effects and/or chronic, long term health effects.

Isocyanates are known to have a strong effect on the respiratory tract in some people. It is reported that there is a susceptible group in the population (estimated to be 5-20% of workers who are exposed occupationally) who can become sensitised to Isocyanates. Sensitization is the body’s hyper-reactive (allergy-like) response to a substance which has been touched or inhaled by a susceptible individual. Sensitization may develop as a result of a large single overexposure, for example, from a spill or accident, or from repeated overexposure at lower levels.

Once sensitised, these people, when later exposed to even very low concentrations of isocyanates even at levels below the exposure standard, can react by developing asthma-like symptoms, such as chest tightness, cough, wheezing and shortness of breath. Such attacks may occur up to several hours after cessation of exposure (for example, during the night after exposure) but, if a person is particularly sensitive, the attack can occur earlier or immediately. This sensitisation is essentially irreversible and can prevent any further work for the individual in their job using Isocyanates or any position associated with use of Isocyanates – even at very low levels below the regulated exposure level and that may not affect others. Many spray painters working in smash repair shops have had to leave the industry because they are sensitised to isocyanates.

An individual’s response to isocyanate exposure can be immediate or may be delayed for several years. Asthmatic people are more prone to sensitisation and other adverse reactions. Persons with a history of asthma, allergies, hay fever, recurrent acute bronchitis or any occupational chest disease or impaired lung function is advised against risking exposure to isocyanates. In rare cases, death has occurred from a severe asthma attack after significant isocyanate exposure.

Isocyanates are also skin irritants (causing inflammation and dermatitis) and there is some evidence that skin exposure can also cause respiratory sensitisation.

Isocyanates are an irritant to the eyes. Splashes can cause severe chemical conjunctivitis.

Other health effects which have been reported include liver and kidney dysfunction. Some Isocyanate materials are considered to be potential human carcinogens (IARC).

Spray painters need to understand the health risks involved in spraying polyurethane paints – these are the two-pack mixes of polyurethane paints and possibly also in the one-pack moisture-cured mixes. These products are widely used in the automotive and other industries because of their excellent gloss, hardness, adhesion and chemical resistance.

The major hazard with spraying polyurethane paints is breathing the mist or aerosol droplets of the paint spray and absorbing the isocyanate and other components into your lungs.

The odour threshold for isocyanates, i.e. the level at which an individual can smell an isocyanate, is typically higher than the allowed exposure limits. In other words, if a painter smells the sweet, fruity, pungent odour of an isocyanate, they are probably already overexposed. That is why the recommended respiratory protection for employees spraying isocyanates is a supplied air respirator and not an air purifying respirator (i.e. filter cartridge style). The issue with use of air purifying respirators is that they will reach a point at which the filter becomes saturated and will no longer capture the isocyanate or other solvents. When that filter breakthrough happens, an Isocyanates overexposure can occur, potentially causing an irreversible sensitization. Use of a supplied air system removes this filter change factor – it does not rely on the painter changing his gas/vapour filters at appropriate intervals.

Note: if isocyanate-containing paint is applied by brush, roller or dipping, in a well ventilated area, there is generally no more hazard than with ordinary paints. These application methods usually do not produce the higher concentrations of isocyanate vapour associated with spraying.

After curing, polyurethane paints contain no free isocyanates and are not hazardous under normal use. However, welding or burning of polyurethane coated surfaces can release a range of contaminants. Gases or vapours evolved can include HDI, TDI, MDI as well as many other compounds (metal fumes, organic gases or vapours, particulates), depending on the original polyisocyanate resin used. When welding or cutting metal coated with a polyurethane coating, a worker may be exposed to a range of these decomposition products which will vary depending on type of process being used to weld or cut, the nature of the base metal and type of coating. Respiratory protection that is suitable for welding applications will also provide suitable respiratory protection in these cases

Some significant points to note from this 3M document. 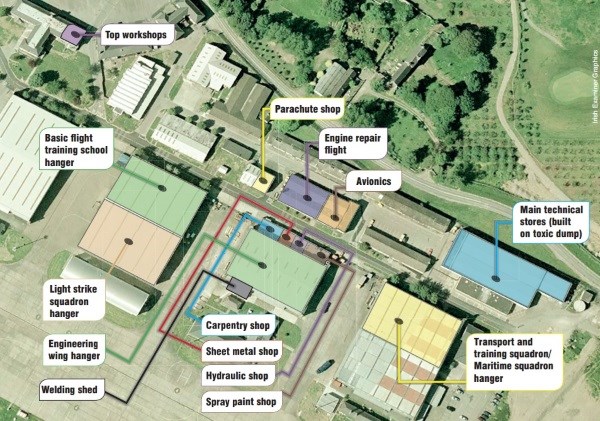 Isocyanates were used by the Spray Paint Shop (Dope Shop) at Baldonnel. For most of the existence of this shop personnel were NOT supplied with ANY PPE. The walls between the Spray Paint Shop and Engineering Wing Hangar & Workshops were not sealed and so isocyanates and other chemicals entered these workplaces whilst spraying was in progress exposing all personnel.

A “waterfall” system with an extractor fan was also present. Personnel spray painted aircraft components toward the waterfall which captured most of the over-spray droplets. Fumes from this waterfall were then extracted by a fan, up a duct and released at approximately 3m height where the prevailing winds then carried the extracted fumes in the doors & windows of Avionics Squadron & Engine Repair Flight exposing further unprotected personnel.

Sensitisation is irreversible and once sensitised it is next to impossible to avoid isocyanates in the modern environment. It is also likely that health effects are suffered beyond the respiratory system & skin for example the gastric & nervous systems.